Well, my birthday was good! As you probably know from my last post, I was feeling pretty rubbish about everything in general just before my birthday, but I had a lovely day with my fiancé and got spoiled rotten. I've always loved putting up pretty cards over my mantelpiece and windowsills!

After the weekend, I started to feel a little brighter. I ended up handing in an application form for a job vacancy at my local Mind, where I've volunteered for previously. I've been out of work for a good few months now due to my depression and anxiety, but this is a job I have wanted and worked for for a very long time, so after spending hours on my application, I knew I'd at least tried my best. A few hours later... I received a phone call for an interview on Thursday! Eeeek! I felt all nervous and excited at the same time and started preparing straight away to try and get myself in the best frame of mind for Thursday.

In the meantime, I struggled with getting a hold of the youth mental health team, where I should have been referred to a good few weeks back now. I'd called the previous week where I was promised a phone call back, and heard nothing. This time, the phone rang and rang, and I decided to just leave a message. A call back a few hours later revealed they actually had no record of me on their system and they would give me a call back later that day or Wednesday.

I felt miffed to be honest - I'd been for my appointment a while ago and had been told my referral was urgent. The GP I'd seen to start this whole process had seemed nice and supportive, and I'd been seen by someone already for a basic initial assessment where I'd be given a timescale of about a week. If you've suffered/suffering from a mental health disorder, I'm sure you can appreciate how every day is a struggle, let alone a matter of weeks.

Anyway, a day later than advised, I got a call back. I'd been found, finally. I've finally got a case worker and have my first appointment with them next week. I'm so nervous as I've never been supported by this team before, and I'm anxious that I will have a similar experience as what I did with CAMHS a few years back. I'm trying my best to keep a level head and give it a shot, as I know I need to explore why I'm feeling the way I do, and it's important to me and my fiancé I get a more formal diagnosis for The Man so we can start seeing why he's loitering around so often.

Thursday came, and I woke up before the crack of dawn. Getting ready for my interview, The Man decided to lurk around, making me feel I was incapable. But there was this little spark in me, just something that reminded me that I have wanted this for so long, and I've worked so hard to try and get in this position. I knew I had been out of work for a while, but I was willing to give it my all, and more, to prove I was the right person for this job. I felt sick the whole journey there, but I was armed with a notebook full of information and having read the job and person specification until I was talking it in my sleep, I felt I had done everything I could.

And Friday? I got the call. They'd made a decision. *gulp*

I GOT THE JOB!!! I couldn't believe it when they told me, I honestly thought I would scream down the phone, but luckily I managed to hang up before I did! Cue dancing round the house and calling my man in floods of tears with the news. He knows how much I've wanted this and for how long. My illness has devoured me recently, and I've not seen a way out. But this it. I'm not saying it's a cure, but the reason I've been crying is because I AM useful. We ALL have a skill and something we're good at, and I realised that on Friday. Yes, I have a mental health condition, but it does NOT have me. I am NOT my illness. I'm Kimberley, 22, living with an illness. And you know what? There's absolutely nothing wrong with that.

My journey is going to be a long one, and I'm not certain it'll ever end. I'm now about to start this therapy again, and I know it's gonna be bumpy. But you know what? I'm not going to accept that it will define who I am. I'm going to continue using it as a tool, to raise awareness, to speak out for those who feel they can't.

I will do this. 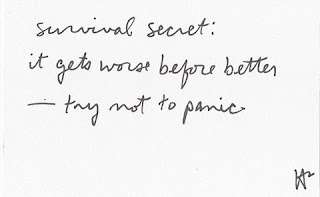