The one thing depression is good for.

I know, I know. The title of this blog makes me sound as though I'm siding with the discriminators who make out depression isn't all that bad, but stay with me on this one!

Things have started cropping up in my life, sayings, quotes, little opportunities, and I know what they're leading to now. My other half would say 'there's no such thing!' but I truly believe there is something set out for me right now, that my struggles might be the one thing that helps me accomplish my goals in life.

I was talking to a lovely man at Mind not so long back. We got into a very deep conversation, and it was fantastic. It was great to talk about mental health with a cuppa and watching the world go by, without feeling any judgement. And then he happened to make a comment: "that's the great thing about depression, is that it makes you hit such a low that that is when things start to change."

He's right - and since then, I haven't been able to forget it. The one thing my depression has given me is the passion to do something in life, and that's to understand it so as to help others. I've finally worked out that doing an Open University degree is the way forward for me, and I can't wait to have that psychology qualification behind me so I can start understanding my own life and other peoples. I'm truly excited, and I wouldn't have had that excitement unless I'd understood the "dark side" as well as I do.

Not long after, I heard a little quote from Dumbo - "The very things that hold you down are going to lift you up." It tied into what Simon said. Things just started to click. And so, I got it tattooed on me. 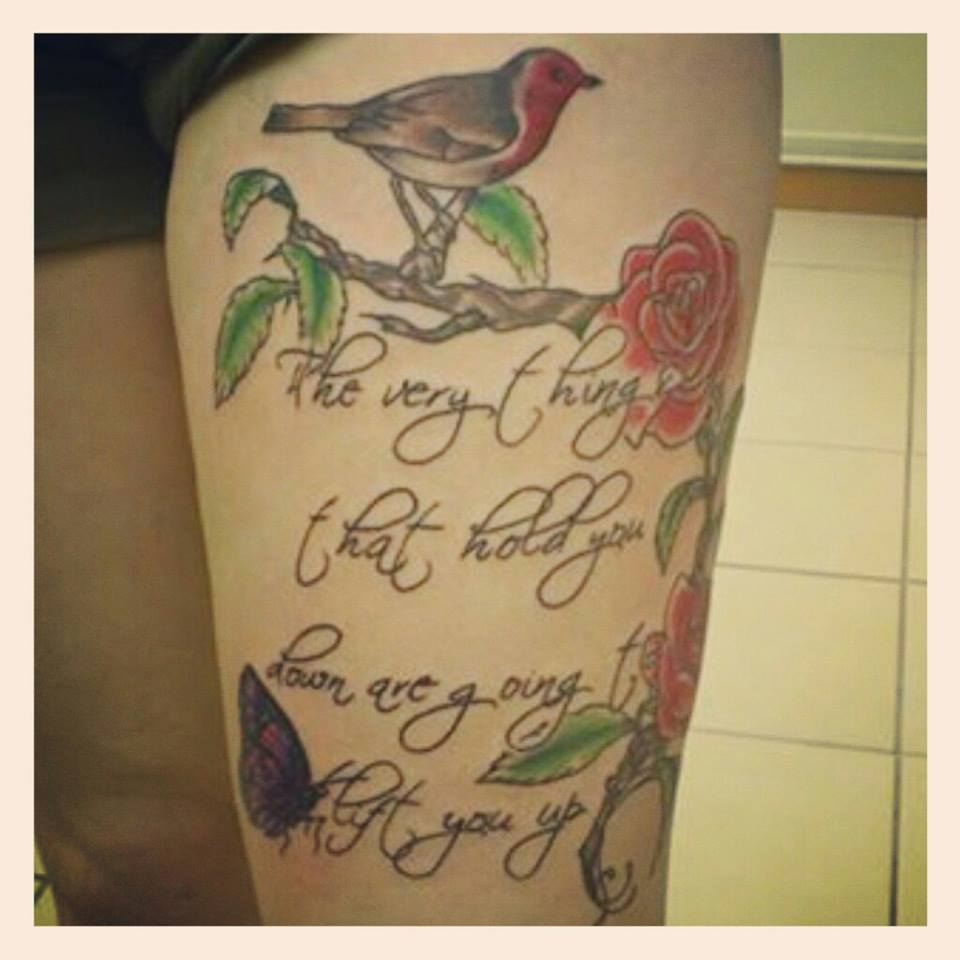 Yes, it did hurt. Especially that bastard butterfly.

Anyway - I started to realise that my depression was a part of me. I've always known it for as long as I had it but now? I'm starting to accept it. My depression is terrible when it's at its worst. My anxiety is cruel to me and my body. But it's also given me that fire in my belly on my good days. It has made me appreciate that when the sun is shining, I need to make the bloody most of it. And yes, I'm sensitive, I take things to heart, and yes, I struggle with things that other people might find a breeze, and yes, I am so far from perfect that it's almost funny, but you know what? That's Kim. And it's time that I am respected for being this way.

When I work, I work hard. I will always give it my all, and that's a promise. I'm trustworthy, and a darn good listener. I hate being late and I'll always be on the end of a phone should ANYONE need it. Because of my depression, I can now start to see that me on a good day isn't all that bad, and I should be proud of my achievements and excited about my future.

Sometimes life is a bit sour. People around you put you down, and I've have a lot of that recently. I've been told I'm a let down, or that I'm a burden. Sometimes I just get told to pull it together and others times I get told that there are others so much worse off than me. Do you know what? Enough is enough.

I need a kick up the arse from time to time, and if you didn't, there's something wrong with you because we all do at some stage. But my depression and anxiety is a part of me - I would love to take it out of me on those dark days where I feel so alone it makes my body ache all over, but I can't and if I can turn that into a positive then am I really such a bad person? I don't think so.

This might seem like a 'biggin' me up' post but I suppose I just want people to remember to be kind to themselves. Tomorrow's a new day, and the people around you that are negative will find a new thing to pick over next week. Ignorance is bliss as they say, and it's easy for those who don't understand, but we have to remember to love ourselves. How else can anyone love us if we don't know how to do it?

""What is REAL?" asked the Rabbit one day, when they were lying side by side near the nursery fender, before Nana came to tidy the room. "Does it mean having things that buzz inside you and a stick-out handle?"
"Real isn't how you are made," said the Skin Horse. "It's a thing that happens to you. When a child loves you for a long, long time, not just to play with, but REALLY loves you, then you become Real."
"Does it hurt?" asked the Rabbit.
"Sometimes," said the Skin Horse, for he was always truthful. "When you are Real you don't mind being hurt."
"Does it happen all at once, like being wound up," he asked, "or bit by bit?"
"It doesn't happen all at once," said the Skin Horse. "You become. It takes a long time. That's why it doesn't happen often to people who break easily, or have sharp edges, or who have to be carefully kept. Generally, by the time you are Real, most of your hair has been loved off, and your eyes drop out and you get loose in the joints and very shabby. But these things don't matter at all, because once you are Real you can't be ugly, except to people who don't understand."